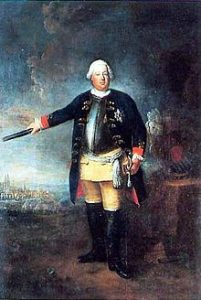 King Frederick William I is considered to be Prussia’s greatest ‚inner king‘, because he envisioned and designed the modern Prussian state. He had the strength and perseverance to implement his vision which was likened to be a ‚revolution from above‘, whereby a poor, demoralized country was transformed within one generation – as if it had leapt forward 100 years.

The term „Soldier King“ is too one dimensional. King Frederick William I also set up a proper administration, successfully organised agriculture, crafts, production and trade. He also brought skilled foreign workers into the country, and made them hardworking and grateful citizens.

Frederick William I was born in Berlin in 1688 and, even as a boy, recognised how badly his wasteful, hedonistic father Frederick I reigned whilst under the influence of hin courtiers. When he finally became king in 1713, and inherited large debts, he rapidly and radically sold or rented most of the inherited castles, reducing estate expenses by eighty percent.

In contrast to his ancestors and rulers in neighboring countries, he focused his efforts on the construction of utility or functional buildings.

Contrary to his earlier principles, in 1730 he had a small hunting lodge built in the Parforceheide near Potsdam. It was his one and only indulgence, being purely for his own use, and that of his hunting party guests.

Today, Frederick William I is largely forgotten, but much of today’s political system is still as it was conceived and enforced at that time. Consequently, if you want to understand Germany, you should get to know this man better!

„He was a man who could not be praised enough; he was very much of his time, and at the same time ahead of it. He not only stabilized kingship, but also, more importantly, laid the foundations for a new era, and replaced disorder, self-rule and confusion with order and justice.“ – Theodor Fontane (1819-1898) in “Der Stechlin“.

Continue the tour → The Hunt