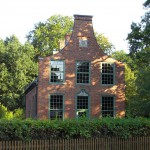 King Frederick William I of Prussia had an unpretentious royal hunting lodge built near Potsdam from 1730–32. It was located near the star-shaped convergence of sixteen pathways in the Parforceheide, a woodland landscape the king had developed especially for deer hunting.

The King loved coursing, a hunting style that involves hunting a prey down by using sight, rather than scent. Due to the horses and dogs running at top speed, the hunting area needed to be large.

Between 1725 and 1729, the King had 40 square miles of bushland turned into a coursing-heath. That included sixteen trails, all radiating from a star-shaped center, called the „Great Star.“ Hunters could easily make it back just by heading to the nearest trail.

The Jagdschloss Stern can be visited from April to September at the dates indicated in the annual program of the Förderverein. Please use our new audio guide (German) if you want to find out more about the Jagdschloss Stern, King Frederick William I, and hunting in the Parforceheide outside the opening time.

During Spring, Summer and Autumn, it is possible to admire the interplay of  between castle, sun and landscape  from the interior and the exterior of the castle.

Take a tour → The King