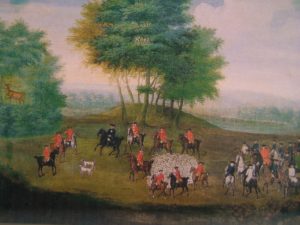 The Parforceheide and the Stern

The area surrounding Potsdam had been used by the Hohenzollern since the beginning of the 15th century as a hunting ground.

In the 16th and 17th centuries, the court of Louis XIV set new trends such as the ‘Parforcejagen’ (hunting by force) which spread and became a passion among European princes, including Frederick William I.

The existing hunting facilities from the time of the ‚Great Elector‘ Frederick William (1620-1688) and his successor King Frederick I (1657-1713) did not, however  fulfill the conditions for the Parforcejagd (Par Force Hunt).

King Frederick William I decided therefore to create new enclosures for the Par Force Hunt, one at Potsdam and the other at Wusterhausen. Between the villages of Neuendorf, Stolpe, Drewitz and Gütergotz (Güterfelde), a new hunting area was built in 1726 and 1728 about 6.5 km (4 miles) from the Potsdam City Palace. In the forest, originally 16 aisles (paths) were beaten, which led in a star shape to the centre of the hunting complex. These star shaped paths were used for facilitate orientation during the hunt, and also made it possible to exclude straying wild game with the help of hunting ‚lobes‘, as well as limiting the hunting area. The Hunting Lodge Stern was then built in 1730-32, and the ensemble of buildings is still recognisable today as a Baroque hunting lodge. 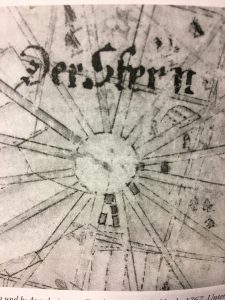 After the death of Frederick William I in 1740, the Parforceheide ceased to be used, until Prince Carl of Prussia (1801-1883) revived this hunting style, which by then was also practised in England.

In the 19th and 20th centuries, the Parforceheide was crossed by various constructions, such as the Teltowkanal, railway lines, motorways and other roads.  More recently, the residential areas Stern, Drewitz and Kirchsteigfeld were built directly over parts of the Parforceheide. Unfortunately, the historic paths and aisles were largely ignored and not preserved.

Nowadays, the remaining Parforceheide is a small green island in the midst of Potsdam’s urban space. It has been declared a nature reserve. It can be explored with Google Maps, but much better on foot through the trails of the Parforceheide! You can find some route suggestions on the flyer (click the link below), which is also available at the events of the Förderverein (Association) at the Jagdschloss Stern:

Continue the tour → The Hunting Lodge